A Tribute to "Chickenman" 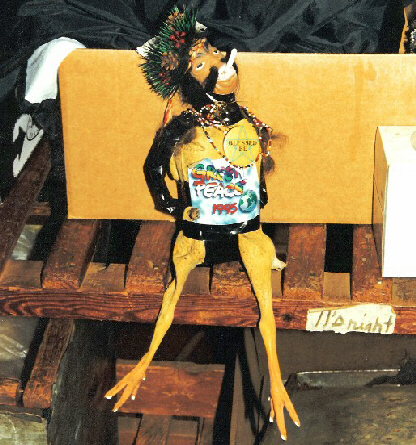 Kilo Q. Chickenman started out as a lowly rubber chicken. He was brought to
life as a living and breathing Mascot of the cigar production department about
ten years ago. What started out as a joke, ended in a reign of relief from the daily
tedium of an eight hour work day. New employees came and some employees left,
but Kilo Q. Chickenman lived on. Each wave of employees added something to the
life and mystique of Chickenman. Almost every day, new stories of his adventures
and escapades would circulate during coffee breaks. At one time, he was actually
kidnapped and held ransom for his return. The perpetrator was never found, but
the ransom was paid and he was safely returned. Chickenman was an avid
environmentalist and was a life member of Green Peace. He also was a Dead Head
and a great fan of the late Jimi Hendrix. Some thought he was a "Pot Head", but
seemed to denounce even the casual use of drugs. It was told that he had actually
tried marijuana once, but he didn't exhale.

For a complete theory of Chickenman's creation
CLICK HERE 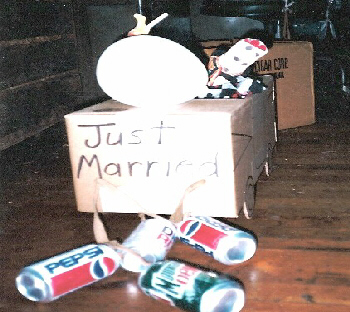 This picture was taken on Chickenman and Elweena's wedding day. They were
preparing to go on their honeymoon in his new SUB (Sport Utility Box). The
SUB was a gift from one of his more enterprising co-workers. 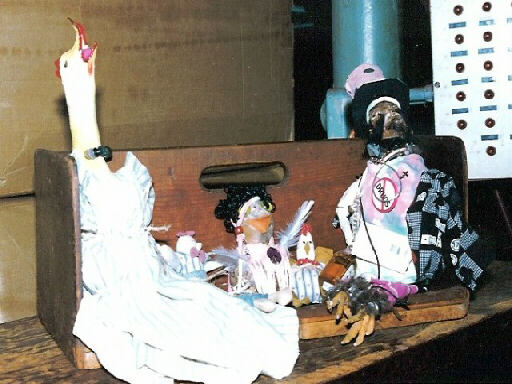 Chickenman was a bit of a Romeo, and it is said he fathered several illegitimate
children. But, after his marriage to his beloved Elweena, he was blessed with
five children. One of his children was a "chick off the old block", following in his
fathers footsteps. But, alas, after the unfortunate passing of his wife, and some say
due to his poor parenting skills, all his children came up missing. It is believed
they were inadvertently thrown in the trash. 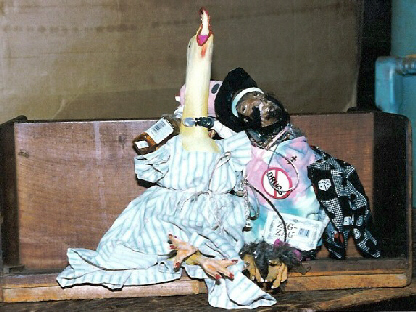 This photo was taken in happier times. Chickenman and his beloved
Elweena celebrate their wedding which was attended by all present
employees. But, alas, his wedded bliss lasted but a short time. His
devoted wife was found murdered, her head severed and missing. A
few days after her funeral, the missing head was found and became
a good reason to have another funeral---------and party. 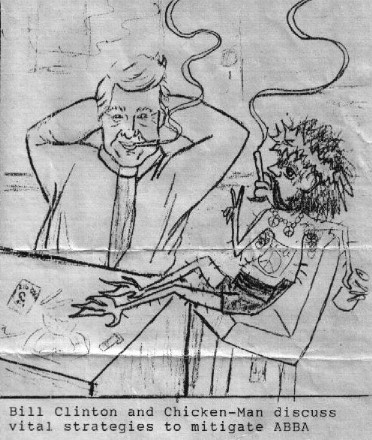 Chickenman was the "butt" of many a political satirist, having numerous
cartoons and comic books written about his adventures. Pictured here is
an example of one of his more turbulent endeavors. He enlisted the aide of
President Clinton to stop the boss from playing ABBA records over the
intercom system. Through lengthy negotiations, it was agreed upon to
allow the boss to play some ABBA if he would play more Jimi Hendrix
and Tina Turner records. 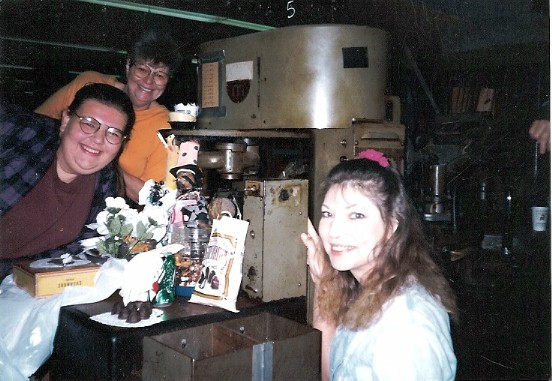 This photo was taken at one of Chickenman's annual birthday parties.
Chickenman loved to party and everyone always had a good time.
Here, Martha, Bev and Leslie are getting ready to party with their friend. 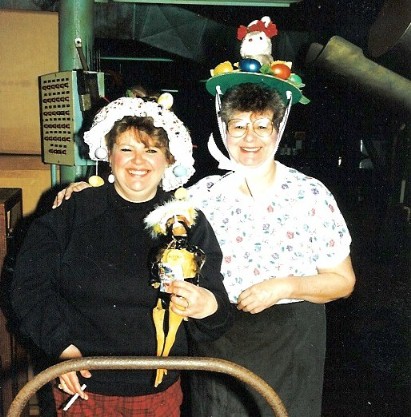 This photo was taken during Chickenman's annual Easter Bonnet contest.
Here, Lu and Bev show off their creations, while posing with their friend.

For a complete theory of Chickenman's death
CLICK HERE

The Funeral June 29, 2001
(or party) was held in the lunch room (rotunda) where several friends
paid their final respects. The following guests were present from left to right:

Rosemary (the Button Lady); Chief historian who has kept all stories of
Chickenman's escapades throughout his life.

Lu; In charge of whining and complaining, also the computer expert
for copying and distributing Chickenman stories.

Linda; Official bodyguard, will do bodily harm to anyone
that "messes" with Chickenman.

Judy; Construction engineer. (she can build anything out of a
cardboard box)

Leslie; Chief writer, editor-in-chief, cartoonist, and all around wit.

Brenda; Chief interpreter (she knows words most of us have never
heard before)

Doyle; He is in charge of taking care of Chickenman's harem.

Drop TurboJer an E-mail and let me read your comments

Back to TurboJer Home Page